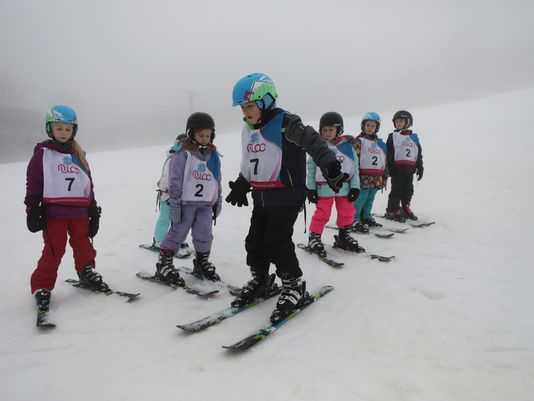 A small but triumphant voice came through the fog that had descended the mountain.

A little earlier in the day, an instructor could be heard through the mist praising a different skier – “Good job, Anna!” the woman yelled. “Look at you! Look at you!”

Visions of just these kinds of moments are what inspired the re-imagining of the former Hidden Valley skiing site in Vernon into the National Winter Activity Center.

A non-profit facility formed by the National Winter Sports Education Foundation and dedicated to an instructional and competition program for kids 6 to 17, the activity center's mission is to improve the lives of young people through winter sports, but its focus isn’t simply on the snow.

It also promotes healthy eating -- giving the kids snacks, a meal and a little nutritional education while they are there -- and attempts to instill some core values that include “persistence, respect, humor,” according to Schone Malliet, the center's CEO.

“At the end of the day, our goal is to improve the life and health of youth through winter activities,” Malliet said. “We do that with this facility, which is dedicated, by giving the opportunity to develop as young men and young women, the opportunity to compete if they want to. ... The other things you need are a healthy meal and equipment. We provide equipment, a healthy meal, instruction and mentorship.”

The organization runs programs for instruction and competition in alpine and cross-country skiing and snowboarding. The Vernon site provided the perfect place for a dedicated facility and mountain. There are no adults weaving around the children, who are just learning.  As a private center, there are no crowds of people filling the line to the ski lift.

One weekend in late January, the facility is loud and bursting with activity as kids get off their buses, then rush into the building to eat, gear up and hit the slopes. On the first floor, near the stairs down to the locker room where the equipment waited, were racks with winter coats and ski pants. For kids who can’t afford or don’t have any of their own, these are theirs to take and keep. The skiing equipment is provided as part of the cost of the program, which Malliet stresses is for children of all socioeconomic levels.

“We could take any kids from anywhere along the spectrum of skills, from any economic environment or geographic environment,” he said. “The idea is to make sure kids who wouldn’t necessarily have access, that’s who we seek out. That access is more than socioeconomic. Sometimes they don’t know.”

The activity center runs it programs for groups, partnering with youth organizations such as Boys and Girls Clubs, the YMCA and schools, which offer the program at a cost generally much lower than it would be for a family to take a child to a public ski facility and rent equipment, get lessons and lift tickets, etc. The programs run six to nine weeks for one day on weekends or on Tuesdays and Thursdays after school.

The Wayne YMCA is one of the organizations that has sent kids the last couple of years. The majority of kids who attend the program enjoy it, according to Albana Maliqi, site supervisor for the group.

Some kids are so excited they get to the Y as early as possible to wait for the bus and rush eating so they can get out onto the mountain as soon as possible, Maliqi said.

“They really love the program,” she said, adding that when an instructor praises a student they are quick to excitedly tell their parents when they are picked up, clearly proud of their accomplishment.

Out on the mountain in a constant drizzle that day, most of the kids seem to be enjoying themselves and trying hard. The instructors keep it fun – especially for the younger and more inexperienced skiers, who spend some time warming up by walking around in hula hoops to work on balance before clicking their boots into the ski bindings (and being reminded repeatedly that it’s toe-first).

A couple of hours later, at the end of their lesson, the same group takes off their skis, walks up a small incline and makes some snow angels while their instructor points out all the positives and improvement from the day.

Samantha Walter from the Sussex County YMCA is out on the slope with that group, encouraging them as they go. Also part of the program last year, Walter has seen the children not only improve in their skiing skills, but in their attitudes toward trying and in their belief in themselves.

“It builds confidence,” she said.

The afternoon lessons end with generally happy but exhausted kids taking off their equipment and heading upstairs for a well-earned snack before boarding buses for home. Another successful day on the slopes, despite the slightly inclement weather.

Malliet intends for this to be just the beginning, the anchor of a national program.

“We hope to replicate, if not the facility, the program in other places around the country ... maybe 70 to 80 miles from an urban area with a large population of kids, whether urban, rural or suburban, who don’t have access, and to use the program to continue to make a difference.”

Winter4Kids is a youth-focused nonprofit organization that changes lives through winter activities. We provide mentor-based, experiential learning and encourage kids to have FUN while mastering nordic skiing, alpine skiing and snowboarding. Our programs deliver incremental physical fitness and have been designed to inspire our participants and build confidence in an educational environment. Our core values; Honesty, Compassion, Integrity, Confidence, Communication, Perseverance, Humility, Humor, Respect, Responsibility and Courtesy serve as principles for our programs and our organization. 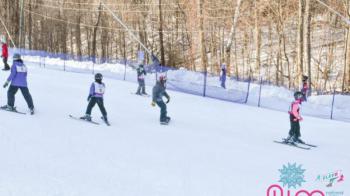 The Winter 4 Kids introduces youth to skiing and snowboarding — sports they may not have exposure to if not for this nonprofit.